What you need to know about that viral photo on Facebook 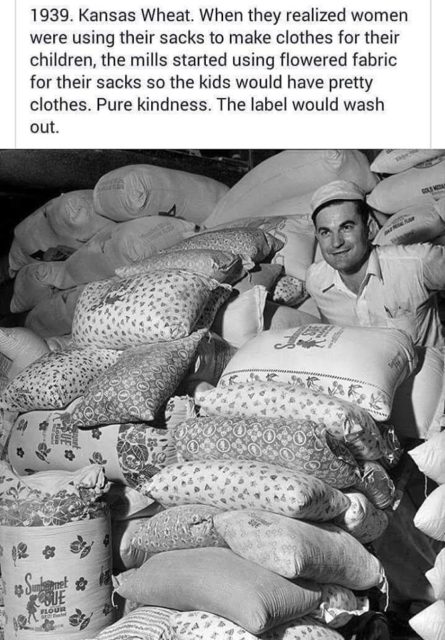 You might have seen a viral image with a man sitting smiling with a heap of beautifully printed flour sacks claiming that the sacks were used to create clothing for kiddos in times of need and wondered if it was true… The simple answer is yes! Flour sack clothing was a staple for many from the 1920s-1960s. But, let’s take a quick look at the history behind those flowery flour sacks!

Let’s go back to a time when everything was all about scrimping and saving on behalf of the war effort. These dresses were worn by women young and old. These dresses have an interesting past behind them, all dating back to when the world was at war and Americans were dedicated to recycling.

In the 1800s, flour, and other bulk products began to be distributed in cotton sacks. Flour mills were able to abandon wooden boxes in exchange for the less bulky cotton sacks, thus allowing them to move more product! Not only did distributers find these cotton bags useful, but it was only a matter of time before homemakers saw a use for these bags. With all this extra fabric laying around the house and the barns people were starting to get creative with uses. Many households would cut the ugly, plain bags into chunks and would use them for dish towels.

These plain cotton sacks would be used until 1922, but the impact and usefulness of them would continue long into the future. On April 28, 1922, The Washington Post announced, “Farewell to the Old Flour Sack.” Millers thought replacing the cotton sacks with paper cartons would be more convenient, both for distribution handling and storage for the average housewife. But, According to Feed Sack Secrets: Fashion from Hard Times, “In just a few short years, however, both the city and rural housewife would see the old flour sack in a new light. Changes were coming, thanks to a young man named Asa. T. Bales.”

Mr. Bales, Roscoe, Missouri, filed a patent in October 1924 for cotton sacks to have interesting patterns and to be of a decent size, so they could be used for clothing. Specifically, Asa was assigning his patent to the George P. Plant Milling Co. in St. Louis for their new line of “Gingham” flour. The line split off into different brands including “Gingham Girl,” “Mother Gingham,” “Baby Gingham” and “Gingham Queen”. Executives of Plant Milling saw this as a prime marketing opportunity, thinking people will see the Gingham pattern and will instantly know it is from their company. Since the sacks were created with clothing in mind, Bales’ patent noted that the markings on the package, such as brand name, would wash away. This was specifically so the cloth could be transformed into clothing.

Other mills caught on to the tactic and then started developing their own fashionable packaging. From pastels to novelty prints, the competing mills would play the game of “who can develop the most attractive pattern?”

“A yard saved, was a yard gained towards victory”

Fast forward a few years to the 1940s, and the United States was engaged in World War II. Americans who were not on the frontlines made sacrifices so the soldiers could have provisions. All available cotton and wool was diverted to the war effort. Desperate for fabric for clothing, homemakers crafted clothes out of the cotton sacks. The flour sack dress became a common, and trendy, outfit. Everywhere you looked there were flour sack dresses. There were even sewing competitions where women would go head-to-head and show off their sewing skills.

These dresses were a way for rural women to show off their fashion sense all while being frugal. Flour sack dresses were all the rage up until around the 1960s. Today, we remember the style of these iconic dresses and the historical legacy that they leave!