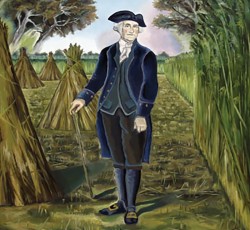 George Washington was not just America’s first president; he was also one of the nation’s first large scale wheat farmers. In all, Washington’s estate included five farms encompassing more than 3,000 acres of cultivated ground. While his operation started out as a tobacco farm, he switched to growing grains, particularly soft red winter (SRW) wheat, as early as 1766.

Washington used his farms to experiment with agricultural practices. According to the Mount Vernon website, “Washington believed that it was the responsibility of wealthy farmers to undertake experimentation, as failures would be inevitable and losses would have to be absorbed while new techniques were perfected.”

That experimentation included developing a seven-year crop rotation that focused on wheat as the principle cash crop. But George Washington’s rotation also included corn for domestic purposes and legumes to improve soil health.

One of Washington’s most innovative agricultural, and architectural, experiments was a 16-sided threshing barn. At the time, farmers laid grain on the ground in a circle and threshed the grain by treading, or leading a horse or other animal around on the grain to stomp out the chaff. Washington took that process and put it to an architectural challenge in order to make the process more efficient.

President Washington designed this unique barn to help with the threshing process. Image from mountvernon.org.

In the polygonal barn, the top floor consisted of a circular treading floor with gaps in the wooden floor. Wheat stalks were laid in the circular track and horses were trained to trot or walk around the circle. Once the wheat was literally separated from the chaff, the grain fell between the floorboards into the granary below. From there, the grain could be winnowed and sent to the mill.

In addition to the threshing barn, Washington also constructed a state-of-art gristmill. Constructed in 1770-1771, the gristmill could grind 5,000 pounds of flour a day.

With his own mill, Washington could produce his own flour for sale as well as grind wheat for other area farmers. According to Washington’s records, the “superfine” flour he produced sold for $8.50 a barrel, 50 cents to $7.00 higher than lower grades.

According to the Mount Vernon website, “An expanded gristmill allowed Mount Vernon to be less dependent upon prices in England, as flour and grain were purchased in a wider market, again something tobacco growing did not allow.”

While most of wheat was sold to local markets, some shipments went as far as England, Portugal and Jamaica.

In 1791, Washington discovered a new process which could move both wheat and flour through the mill utilizing a bucket elevator. This meant the work could be done without manual labor. Washington installed the system into his gristmill, which is the same process the gristmill uses today.

Unfortunately, both the original threshing barn and mill were eventually dismantled as Washington’s estate fell into disrepair. Luckily, visitors today to Mount Vernon can visit recreations of both buildings. The threshing barn has regular demonstrations, threshing the wheat grown on Mount Vernon’s Pioneer Farm according to Washington’s practices. And, just down the road from Mount Vernon, the recreated gristmill grinds the grain for products sold in the Mount Vernon gift shop and for use in rebuilt distillery next door.

Now that you know a little more about wheat was grown historically, take a look at modern wheat production! Or, learn to make a rustic wheat wreath that would even make Martha Washington jealous.