Tony Alvarado grew up in Van Horn, Texas, a little town by the freeway, about 120 miles southeast from El Paso. He lived with his family – his father, mother and eight children: three girls, five boys – he’s number three. His father was a laborer and didn’t speak any English.

“There was never enough money.” says Tony. “Having that many kids, I don’t know how we did it.”

And his mother’s job according to Tony? “Taking care of us kids.”

She didn’t have a washing machine, or a dryer. She did everything by hand.
Plus, she had a family to feed.

“Every time I make tortillas I remember Mom sitting by the stove, rolling tortillas while all the kids were around the table waiting for them,” he remembers, laughing. “If that’s not love I don’t know what is. It’s love and it had to be done. She never complained.” 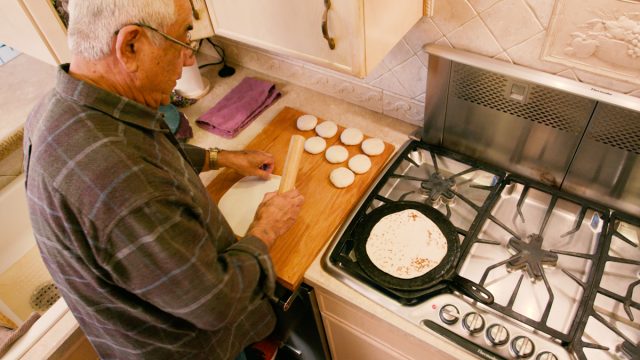 He continued the tortilla-making tradition with his own family – he has a wife and grown daughter now. When his daughter, Cheyanne, was in high school she wanted to visit Europe. In order to afford it, the family worked together making over 3,000 tamales and 2,500 chili con carne burritos and sold them. In the end, they raised enough for her trip.

“We’ll go home to Texas and all the family gets together and all we do is eat. And tell stories..lies..but you know how it is.”

And while he doesn’t make homemade tortillas all the time – (“I hate to say it but sometimes I just buy them at Walmart”) – it still remains a special, social activity saved for dinner with friends or reunions with family. “In Spanish culture that’s one of the big things we did when we got together: cook. We’ll go home to Texas and all the family gets together and all we do is eat. And tell stories..lies..but you know how it is.”