Facts About Your Favorite Italian Dish! 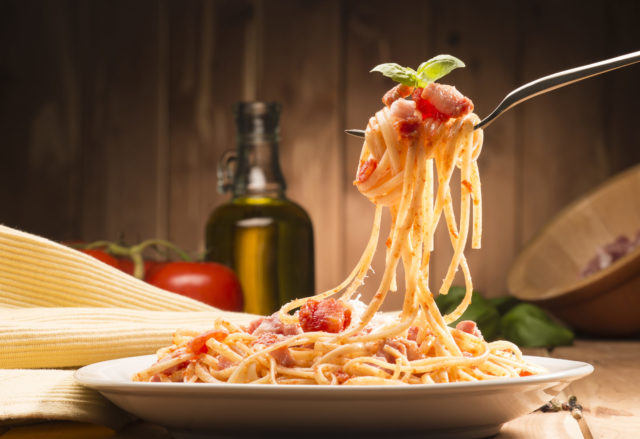 There’s one dish that unites us all… From young children obsessed with chicken tendies to hardcore foodies to broke college students to animated street dogs and everyone in between… Spaghetti! It’s National Spaghetti Day on January 4th, so let’s dig into this delightful dish with some delish spaghetti facts!

Even though spaghetti is thought of as an Italian delicacy, it originated in China as early as 5,000 B.C. Another common misconception is that Marco Polo introduced Chinese pasta to Italy… In fact, another Genoan soldier requested “bariscella penia de macarone” – a small basket of macaroni- in his will 16 years before Marco Polo returned from his adventures in China. So pasta was already in Italy before Marco Polo was in the picture!

In the years after its introduction in Italy, spaghetti and other dry pastas were a luxury. This is due to the long kneading time and high labor costs it took to produce this tasty treat. It was only after the Industrial Revolution and mechanical advances that large scale production of pasta was possible and spaghetti became a staple in the diets of all.

Believe it or not, Thomas Jefferson introduced pasta to America in 1789. Not only was pasta a tasty addition to American cuisine, but Jefferson also grew wheat at Shadwell Farms. This is the plantation that his home Monticello was located on. Jefferson’s father originally used the plantation to grow tobacco. In 1793 Thomas Jefferson returned to the farm from an extended stay in France and switched the plantation over to wheat and grain production. Wheat required less labor (which unfortunately was provided by slaves) but needed greater amounts of organization. The introduction of a new food product required growing new inputs. This is a gap that Thomas Jefferson was more than happy to fill. Jefferson continued to grow wheat on the Shadwell Farm Plantation until his death on July 4, 1826.

You’ve got the scoop with spaghetti facts, now join us in celebrating this tasty dish!